I had a reasonably typical experience the other day on an auction catalogue shoot with a stunning Aston Martin DB2/4 that was just out of MOT. We had planned to run the car to nice location to shoot it but short on time we had to compromise by photographing it in a fairly scruffy  garage back yard. All was not lost as the space had bamboo screening and it was a nice day and the shoot was going well until we had to turn the car for the nose left front 3/4 view an saw nasty reflections.

This projected a horrible reflection of the brightly lit yard into the shaded side of the car but looking around we found a sheet of white painted ply which we used to shield the background with the added effect that it bounced the light back into the car lighting the side.

The result was pretty good…….

I’ve recently been working on a series of shoots for book publisher Dorling Kindersley. They are known for their stunning studio style books with complicated spreads out of white but whilst they used to actually photograph their subjects in a studio, digital technology now allows for the same high quality images to be taken on location. This demands creating studio lighting inside somewhere that isn’t a studio, in this case the Haynes International Motor museum in Somerset and was complicated by mixed daylight, spot and fluorescent lighting which all need to be balanced up with flash.

We had to shroud a BMW CSI in white sheets to kill reflections into the windscreen and bodywork from skylights above the car.The back sheet is there to aid the cut out process with white seen through the car’s rear window.The foreground is lit by flash with a white reflector sheet lifting the exposure in the tyres, grille and front bumper but to get the necessary depth of field it helps to use the available light and a long exposure. 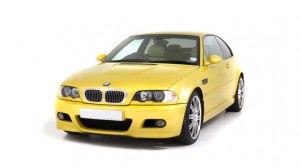